Amherst, New York - The Buffalo Niagara Association of REALTORS®, Inc. (BNAR) presented a special award from the National Association of Realtors (NAR) to nineteen members for forty years of service to the real estate industry as well as the first ever Lifetime Achievement Award.  The awards were presented at a luncheon last month at the Buffalo Launch Club in Grand Island, New York.

BNAR’s very first Lifetime Achievement Award was bestowed upon Mary Ann Kustich, WNY Metro Roberts Realty.  Most recently, she too joined the ranks of Realtor Emeritus and was one of BNAR’s Centennial Honorees in 1994 because of the significant contributions of time, energy and devotion to the Association.  Mary Ann Kustich has also fulfilled every Officer position at the BNAR and became the first woman President in 1990.

Throughout the years she has always been an active salesperson and earned the BNAR Sales Award.  She was the first member to receive the Buffalo Award from BNAR for outstanding service for being the creator and founder of the Annual Agents’ Day and Trade Show and received it once again for being BNAR’s Historian and Parliamentarian.  In 1994 she was named BNAR Realtor of the Year.

Kustich has done so much for the Association and its members.  Besides serving on many committees as well as Chairmanships, she was the creator and author of a “Blue Book” for BNAR which included Bylaws, Rules, Policies, Code of Ethics, and contact information for each member of the BNAR.  She also was responsible for the initiation and completion of the BNAR Champion Map Book which included all of the MLS areas.  Kustich was even part of the travelling team to Rochester and successfully joined Buffalo, Rochester and Syracuse for the first computerized MLS System. Besides the Realtor Association, Kustich was also a Charter member of Western New York Real Estate Information Services (MLS) Board of Managers and was instrumental in writing their Bylaws and membership agreement

NAR and BNAR have honored a total of seventy five Realtor Emeriti throughout the years.  Awardees were presented with a lapel pin from the National Association of REALTORS® which will be worn with pride for their dedication to the real estate profession.

“BNAR is proud to honor these individuals.  Their passion and commitment to the real estate industry for so many years makes them remarkable role models”,  said John B. Leonardi, Chief Executive Officer of BNAR.

Kustich received a separate award ceremony at the event and was given a Crystal American Flag from the Association.  Presenters of the award were good friends and fellow Realtors Margaret Hartman and William Horohoe.  “Mary Ann is the ‘godmother’ of real estate, stated Louis Vinci, 2013 BNAR President.  Her undying energy, enthusiasm and sincerity of service are always 100% for our Association and our profession and she is well deserving of this award.”


The Buffalo Niagara Association of REALTORS® is one of more than 1,300 local boards and associations that comprise the National Association of REALTORS®.  As the nation's largest trade association, NAR is "The Voice for Real Estate," representing over one million members involved in all aspects of the real estate industry. For a list of local real estate professionals and/or our REALTOR® Emeriti contact the BNAR at 636-9000 or visit www.bnar.org. 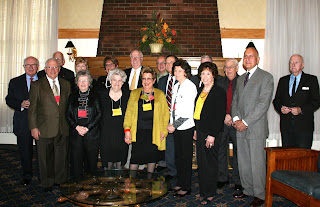