Essex Greens at Waterford will consist of 102 luxury patio homes surrounded by a scenic natural wooded setting protected by the Western New York Land Conservancy; the first phase will feature over 50 home sites. These patio homes are designed for today’s home owners interested in a lower maintenance lifestyle that still includes all the luxury features they desire.

In addition to the natural beauty and privacy of Essex Greens at Waterford, this new community offers walking and biking trails plus convenient access to Transit Road shopping, dining and entertainment, as well as, being just minutes from several Clarence Town Parks, and a beautiful local branch library.

The project is slated to break ground this Spring. “We are now accepting lot reservations, so we encourage you to get your name on the list to secure your first choice of home sites” said Nanula.

As a premier builder in the area, Essex Homes’ mission statement pledges their homebuyers; Commitment, Quality, Service and a Pleasant Home Building Experience. Susan Ballard, Regional Sales Manager, for the project explained “Essex Greens at Waterford patio homes will feature attractive designs offering many functional and varied floor plans with luxury amenities and custom options to personalize each home. The homes will range in size from 1600 to over 2400 square feet; all featuring first floor master suites with optional second floors that will start in the low $300,000s.  “Preconstruction pricing incentives in place make these luxury patio homes a tremendous value” said Ballard.

In addition, all Essex customers receive professional interior selection service, a Home Buyer’s Guide, professional mortgage assistance, a market analysis of their current home and a closing kit as standard professional services.  Plus, all homes are backed by the Essex Triple 24 Buyer Protection Program, the best new home warranty in the business.

To learn more about Essex Greens at Waterford you can visit Susan Ballard at our pre-construction model, located at 9254 Kristina Circle in the Shadow Woods neighborhood off Goodrich Road in Clarence Saturdays and Sundays 1 – 5pm, or contact Susan Ballard  at 725-7577 or  www.essexhomes.ws for more information.
0 comments

Forbes Capretto Homes is pleased to announce the grand opening of the “Crestwood” at 5962 Corinne Lane in the Waterford Estates community.  This custom-built home offers nearly 3,300 square feet of living space with four bedrooms.

The home welcomes you and your guests with a stylish exterior that shows a full covered front porch and professionally-landscaped yard.

Inside, the first floor offers 9’ ceilings and a generous allocation of hardwood flooring. The two-story foyer features a clerestory window, large storage closet and guest bath.  Double French doors open from the foyer to the private den/playroom. Opposite, the dining room features crown molding and painted chair rails, adding formality to the room.

At the back of the home, an open kitchen/dinette includes a large pantry, center island snack bar and breakfast area.  The L-shaped run of granite counters provides separation from the sun room with its cathedral ceiling, bright windows and door to the back yard. A columned half wall borders the two-story great room, which includes a Majestic fireplace with custom mantel and an overlook from the second floor.

Completing the first floor layout, the owner’s entrance provides easy access to and from the garage.  A walk-in closet and custom-built bench provide storage space for coats and boots.

Upstairs, the owner’s suite is tucked away at one side of the home for privacy.  The spacious bedroom includes a box bay, large walk-in closet and private bath with tub, separate shower and double sink vanity. Ceramic tiled walls and granite counters create a spa-like atmosphere. Three additional full-sized bedrooms and the main bath, with double sink vanity and linen closet complete the second floor.

Now available for purchase at only $447,900, 5962 Corinne Lane may be viewed Saturday and Sunday from 1pm – 4pm and by appointment.

Waterford Estates is a highly sought-after community off Shimerville Road in Clarence Center, just moments from shopping and entertainment at Transit Road.  For more information about this home and our other available home sites, please call Stacey Spokane at (716) 830-3113. 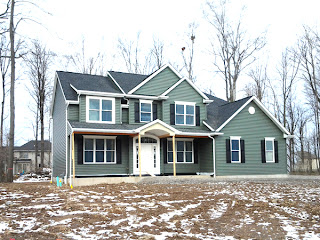